National Treasury has cited excessive communications costs in SA as one of the factors inhibiting the country’s competitiveness.

Finance minister Tito Mboweni has called on members of the public to comment on a paper published last night, titled: Economic transformation, inclusive growth and competitiveness: Towards an economic strategy for South Africa.

The paper, prepared by National Treasury, is an attempt to translate the broad outcomes of inclusive growth, economic transformation and competitiveness into specific programmes, and draw on a range of domestic and international literature to support these policy priorities.

This paper considers the contribution of specific growth reforms that can achieve the stated outcomes.

“A series of cyclical once-off shocks, such as political turmoil, drought and most recently load-shedding by Eskom have further exacerbated the depth of the slowdown. Together, these have served to compound and prolong the effect of weaker confidence, leaving us with an economy that has almost 30% unemployment,” says Treasury.

It believes that modernising network industries such as transport, energy, water and communications can promote competitiveness and inclusive growth. These industries are the backbone of the South African economy and key for long-term growth and global competitiveness, it says.

The cost of communicating is excessively high in SA, it says. SA ranks 126th in terms of prepaid mobile cellular tariffs and 69th in terms of fixed broadband Internet tariffs, according to the World Economic Forum.

During the tabling of the 2019 National Budget Speech in Parliament in February, Mboweni also said data costs must fall.

The hotly contested debate of lowering data costs dates back to 2016.

South Africans have been vocal about their displeasure in regard to the cost to communicate. Citizens took to social media to complain about high mobile data costs under the banner #DataMustFall.

“Even out of 17 African states, SA is the fourth most expensive in terms of broadband costs. One gigabyte of data costs $14.10 in SA. In Cameroon (the cheapest country), one gigabyte costs $2.10.”

At the same time, the quality of broadband is poor, Treasury notes, adding SA ranks 119th globally in terms of download speed. Average connection speed in SA in 2016 was 6.5Mbps, ranking it 73rd out of 146 countries, it says.

According to Treasury, SA also has extremely low levels of ICT uptake and access, especially of broadband, in comparison with other countries.

It points out that while SA performs poorly compared to its peers in ICT indicators, any progress that has been made to date in price, quality and access has largely been due to increased competition, through the entrance of challenger firms and regulating for competition.

Treasury believes that while mobile has dominated the broadband space, it is not a sustainable technology for the future of broadband.

As technologies improve and demand for data continues to rise, fixed-line broadband is the only future-proof broadband technology as there is no limit to its ability to transmit data, it says.

On the other hand, it says, spectrum (used for mobile broadband) is an inherently limited resource.

“While fibre-to-the-home providers have successfully entered this space in some areas, Telkom is the only company to have a substantial fixed-line access network (also known as the local loop), which connects households to exchanges.

“This is the most expensive component of the fixed-line infrastructure. Immediate enforcement of local loop unbundling, as per the ICT policy, would enable multiple providers to have access to the local loop, enhance competition, and reduce unnecessary infrastructure duplication.” 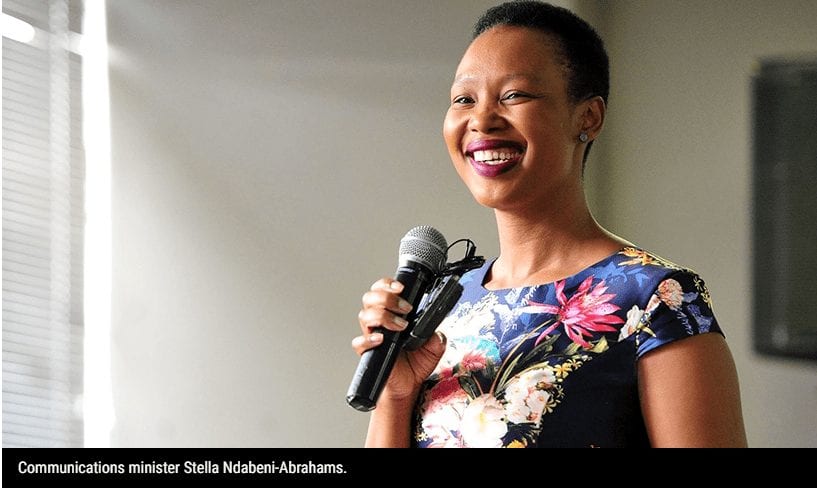 Treasury also highlights that obtaining rights of way to deploy telecoms infrastructure in SA is notoriously difficult, with lengthy processes that vary between municipalities and public entities.

There are also cases where firms have had to litigate to roll out their network, it notes, pointing out this is particularly challenging for smaller firms that lack the resources to cope with the delays.

However, rapid deployment guidelines are in the process of being finalised by the Department of Communications and Digital Technologies (DCDT), as part of the ICT White Paper Policy process.

The poor enforcement of the facilities-leasing regulations in the Electronic Communications Act delays the progress of services competition and benefits the incumbents, adds Treasury. Open access conditions (which are central to DCDT policy) should be imposed to minimise unnecessary duplication of infrastructure and to bring about services-based competition.

It believes that effective economic regulation is essential for constraining incumbents and enabling the DCDT to meet its goals.

The Independent Communications Authority of South Africa (ICASA) has admitted to being a weak regulator, which has benefitted incumbents, it notes.

However, it adds, the success of mobile termination regulation hints at ICASA’s potential. Stronger powers of enforcement need to be ensured.

The DCDT, as part of its 2013 SA Connect broadband strategy, intends to roll out fibre to schools, hospitals and other government institutions across the country.

In 2016, says Treasury, the department issued a tender for phase one of the rollout, but there were no bidders that were able to meet the specific tender requirements.

The department is in the process of rationalising state-owned companies in the telecommunications sector and has indicated it seeks to establish a new infrastructure company.

In the meantime, there are indications that state-owned companies in the telecoms space will be tasked with government’s broadband rollout.

However, the private sector’s proven capability in broadband infrastructure development could also be leveraged, through conditions attached to spectrum licences, to speed up the process and reduce the burden on the fiscus, says Treasury.

National Treasury is of the view that the delay in digital migration and the spectrum allocation process is the single biggest constraint on the growth of the telecommunications sector and is a bottleneck for broader economic growth.

“Spectrum is a scarce and finite resource, which when used for broadband, is an enabler for economic activity and development.

“A large proportion of high-demand spectrum will only be available for use for mobile technologies (3G, 4G and even 5G) once the analogue signal has been switched off.

“To date, the digital migration process has been significantly delayed due to the challenges around set-top box procurement, which aims to provide indigent households with set-top boxes for their televisions so that they can receive programming through a digital television signal.”

It notes the Department of Communications has revised the process around its set-top box distribution, due to the legal and budget-related problems experienced to date.

“The latest position is that government will embark on a retail-driven approach, such as giving vouchers to indigent households to buy set-top boxes from commercial providers rather than continuing with a plan to run the project itself.

“Consumers will be able to choose their type of technology and even supplement the vouchers with their own income to buy high-speed devices, including integrated digital TV sets. With spectrum allocation, broadband speeds will improve dramatically and prices will likely fall, which will support growth and improve welfare.”

Spectrum should be allocated through an auction, with provisions for effective rivals, conditions for universal service and access, and a small set-aside for a wholesale open access network (WOAN), says Treasury.

The South African government recently issued the long-awaited policy and policy direction for the licensing of high-demand spectrum, paving the way for WOAN licensing.

In the policy, communications minister Stella Ndabeni-Abrahams directs that a portion of unallocated high-demand spectrum must first be assigned to a network category of licensees, known as WOAN, and the remainder must then be assigned to other eligible licensees.

In addition, says Treasury, broadband should be rolled out to underserved areas enabled through a more competitive telecoms sector and lower data prices.

This is a republished article, originally posted by ITWeb. For this reason, RF Optix can not guarantee or be held liable for the accuracy of its content; nor does it represent our opinion.

We use cookies to ensure that we give you the best experience on our website. If you continue to use this site we will assume that you are happy with it.AcceptPrivacy Policy
Go to Top